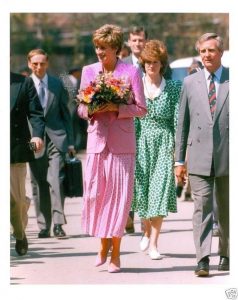 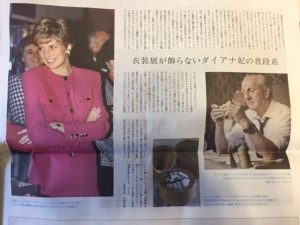 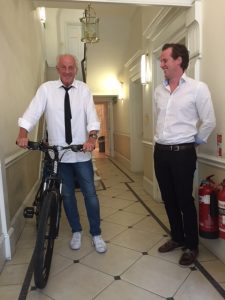 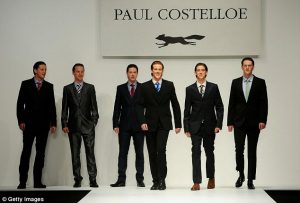 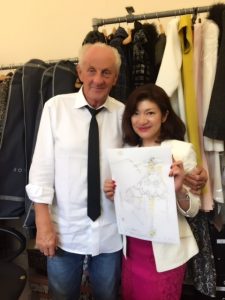 *English version of the arcile

Twenty years after her death, Princess Diana is still very much loved as “everyone’s princess”.  The image of the “royal but familiar princess “ has also been influenced by fashion. The designer who contributed to that image is none other than Paul Costelloe (72), one of Ireland’s leading fashion designers. From 1982 until 1997 when Princess Diana passed away, he served as her personal designer. I had the pleasure of interviewing him at his design studio in London.

It was a coincidence that Princess Diana found him. When Mr. Costelloe opened a boutique near Windsor where the residence of Queen Elizabeth II is located, the designs in the window caught the eye of the Princess. “She understood and liked my tailoring immediately”, Mr. Costelloe said.

Upon receiving a request from Princess Diana, Mr. Costelloe went to Kensington Palace for fittings. At the time, an Irish designer was perhaps not so welcomed by the staff of the palace.  But Diana was sure to give him a warm welcome. Mr. Costelloe remembers those moments well. “I always brought her a bouquet of flowers” he said.

Many of the styles requested by the Princess were worn on her official tours around the world, including print dresses created using Irish linen which she wore during a formal visit to Australia. But his most frequent work was her daily wear – outfits worn for her day-to-day responsibilities such as collecting the two young princes, William and Harry, from school. These outfits were functional but smart and beautifully tailored. It was these “everyday pieces”, which combined the elegance of the princess herself and the relaxed and real manner in which she lived her life, that helped to foster the image of Diana as “everyone’s princess”. Princess Diana sent Christmas cards every year to Mr. Costelloe until she died. And Paul is proud to call himself “everyone’s designer”.

“What kind of person was Princess Diana, from the viewpoint of a personal designer?” I asked Mr. Costelloe. After thinking for a while, he put it like this: “She had guts…she became a real game changer.”  She fought against prejudice, and talked honestly about her feelings, expressed in her own words. By breaking the standard mannerisms and customs of the royal rules she fundamentally changed the way the Royal Family should be and should behave. Mr. Costelloe says he feels happy Diana’s revolutionary words and actions have influenced her two sons in a positive way throughout their lives.

Mr. Costelloe is now working closely with a Japanese family-owned company that produces a cobalt-chromium alloy, Cobarion, in Kamaishi City, Iwate Prefecture. He is working with the firm on the design and development of an exclusive Claddagh Ring – the first of its kind to be made in this metal which is only produced in Iwate Prefecture and nowhere else in the world. The Claddagh Ring first emerged in Ireland in the 17th Century. It’s iconic heart, crown and hands motif has become a globally recognized symbol of love, friendship and loyalty.

The ring was launched in Japan in 2017 to coincide with the 60th anniversary of the establishment of diplomatic ties between Japan and Ireland but more importantly is a symbol of remembrance and solidarity for the lives lost in the tsunami which struck north-east Japan and Kamaishi City in March 2011. A wave engraved around the band of the ring is a reminder of the disaster and the many lives that were lost and all those affected. In a ring designed by the “everybody’s designer”, I feel that I can see the charitable spirit of Princess Diana living on – someone who strived to give love and friendship to the injured and suffering.